BO JOSEPH
BO JOSEPH
The Inferno Series Statement, 2001
When I was a student, I saw a suite of drawings that Robert Rauchenberg had done in response to Dante's Inferno. What struck me most about his series was the way in which he combined widely disparate forms and iconography in the same arena to make a highly focused statement. He used everyday images from pop culture and media and transformed them into charged symbols. These works evoke questions about the kinds of hells that exist all around us as exemplified by the violence and dehumanization of life, the destruction of nature, as if we are creating our hellish reality day by day. 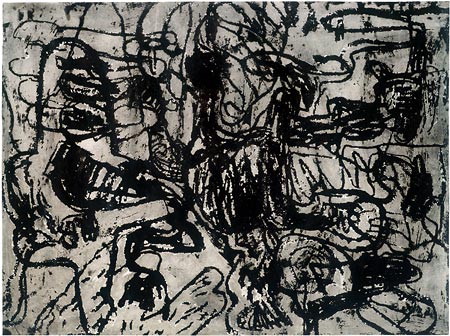 
Later, after reading the Divine Comedy, I came across a book on the work of Sandro Boticelli's drawings for that same work. Although these were made at the end of the 15th Century, they show an interesting and highly forward thinking approach. In order to follow Dante's narrative in a linear way, Boticelli drew each circle of hell as one space and then drew Dante and Virgil in several places in that same space. The affect it has is to layer the awarenesses and truths within each of Dante's canto into a single image. This method serves to collide multiple awarenesses and definitions of reality into the same image, in a way very similar to Rauschenberg.

The work in this show Inferno: Hydra has a very direct though unintentional relationship to Boticelli's drawings in which mythical fantastic beasts torment the souls in hell. The central structure in my drawing is like a multi headed creature with wings and arms and legs spread out and writhing. This is intertwined with and emerging from a chaotic network of lines and marks. Of course, I had not intended the drawing to evolve to this particular image. It grew out of the process of "conversing" visually with the relationships as they unfolded. I was making marks and forms in response to what I was processing internally—Boticelli's exquisite drawings, my own fears for this world, my own faiths, my contemplation of life's mysteries, etc—and making marks in response to what was growing on the page.

My effort in my own Inferno series is to apply these approaches to colliding realities and awarnesses through pure abstraction. While Boticelli and Rauschenburg used representational forms, I am using abstract and associative forms. I seek to distil my experience of hellish realities and truths to purely visceral information. In my view, abstraction is a way to simultaneously process and depict subtle and multifarious relationships in reality that the conscious mind cannot grasp. Also, my hope is that, in processing this information, a similar ethical and spiritual growth evident in Dante's journey will occur both for me as I work and for the viewer.


Other works from the Inferno series: 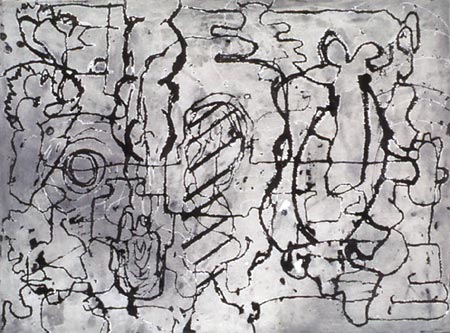 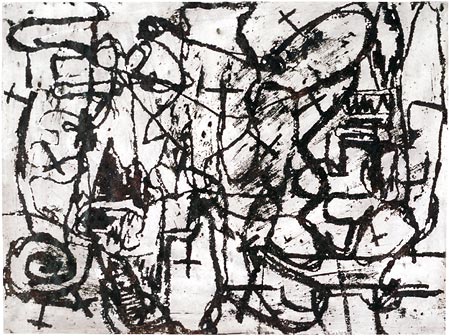 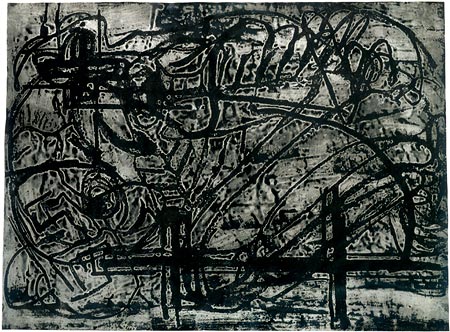